MyTasker is a well-established and fast growing firm in the virtual assistant industry. The India-based company was founded in 2012 by three veteran VAs, who brought years of experience to the table.

Since the MyTasker team spent the time in the trenches, they know how to take care of clients and were able to recruit high-performing professional virtual assistants to join their team.

Interestingly, MyTasker started out as a contract service on Freelancer.com. After gaining some initial traction on that platform, they decided to launch as a standalone operation.

The Kolkata-based company now has over 100 professional VAs on staff and has built a solid reputation on this review platform. Co-founder Gurjeet Dhillon explained that once a client fully integrates MyTasker into their systems and processes, they tend to stick around for a long time.

Is MyTasker Right for You?

I had the chance to sit down with Gurjeet to learn more about the company. In this brief interview, we cover:

Your dedicated MyTasker VA can handle just about any remote task, including:

They also have expertise in:

Naturally, your virtual assistant can handle general administrative tasks as well such as appointment setting, travel or restaurant reservations, or other back-office tasks that can be completed remotely.

If you need help with SEO and driving more traffic to your site from Google and other search engines, MyTasker has built up a dedicated team of SEO experts.

The service includes on-page optimization and off-page link building, and is ideal for local businesses. You pick the 10 most important pages on your site you want to rank for, and the SEO guys get to work.

Google is notoriously fickle so don’t expect results overnight, but over time you should begin to climb in the rankings.

With My Tasker, you’re assigned a dedicated point of contact. For each task you delegate, they’ll either tackle it themselves, or request help from a qualified team member.

You can communicate via phone, email, or Skype, and delegate tasks on a recurring or on-demand basis.

I see this team access as one of the primary benefits of companies like MyTasker. With a single point of contact, you can tap into an entire office worth of skillsets.

Your pre-purchased hours expire at the end of each billing cycle, but there are no long-term contracts and you can cancel at any time.

Your VA’s hours are tracked inside MyTasker’s internal dashboard so you can always log in and see how much time you have left for the month.

I was impressed during my trial of My Tasker, but I was using their now-discontinued “Lifestyle Assistance” plan, which offered 30 15-minute tasks for $39 a month.

Since then I’ve used their service for some daily database maintenance tasks and found them to be quite reliable. At one point, my VA had moved on to a new role within the company and it was several days before I even found out because she’d taken full responsibility to train her replacement. 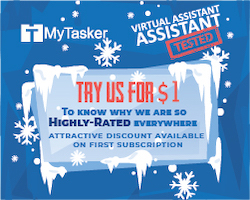 That means you can have a full-time 40-hour a week VA for just $1200, which is a strong value for ongoing business support.

If you want to take the service for a test drive, I suggest selecting one of the smaller plans to start with, and then scaling up your engagement from there. (Use the discount code below!)

If at any time you go over your plan’s hours, additional time can be purchased at $15 an hour (assuming staff availability).

My Tasker added a call answering service where you can have a virtual receptionist answer your business line 24 hours a day. They’ll log and record each call, and give your company a professional presence on the phone.

I asked Ronny, the COO, what sets My Tasker apart from the competition, both in India and elsewhere. He explained that the team’s extensive experience in the industry, especially on the customer service side, gives them an advantage. One company that operates a similar model is OkayRelax, which provides a dedicated assistant at $4 per task when you buy 25 tasks a month. Two other great alternatives that are in the US with competitive pricing is ClearDesk and Online VA Team.

“We have the freedom to go that extra mile to make sure our customers are satisfied,” he says, implying that other larger VA companies don’t necessarily afford that freedom.

Have you worked with MyTasker? If so, please share your experience below and help others with their decision.