Visit Site
PATLive 0 out of 10 based on 0 ratings.
This post may contain affiliate links. Please read my disclosure for more info.

PATLive is a 24/7/365 live answering service, specializing in handling all types of inbound calls for thousands of businesses across the U.S.

The company has been in business since 1990. They started out as a small hosted services company, later shifting their business model to a virtual live call answering service.

PATLive started out as a small voice company, but gave such great customer service that people asked them to start taking their calls…so their live receptionists were born.

With enthusiasm, intelligence and a strong sense of responsibility – PATLive’s live receptionists bring the traits that make our customer service so great on every call.

With the most powerful and flexible call handling technology in the industry, every PATLive service includes a fully customizable call experience.

nd call handling instructions you want their agents to use. Messages or leads will be submitted to you in real-time following every call (if you choose), so that you never miss a beat.

It’s easy to get started with an on-demand team of over 150 U.S.-based PATLive virtual receptionists. In most cases, they can begin answering calls for your business in as little as 24 hours.

PATLive’s virtual receptionists save you time by performing just about anything you would do on an inbound call and can even integrate with your software to submit call information within the tools you’re already using.

The core of PATLive’s service is to provide a range of virtual receptionist services. This means you can have a receptionist on the end of the line for your customers 24/7 at a much lower cost than hiring one in-house.

Some of the services their agents provide from the other end of the line include:

PATLive have five different pricing plans. Their smallest plan is for 75 minutes of call time a month that works out at $1.99 per minute. With their largest plan including 1,000 minutes and reducing the per minute cost to just $1.

A full list of their plans at the time of publishing is as follows: 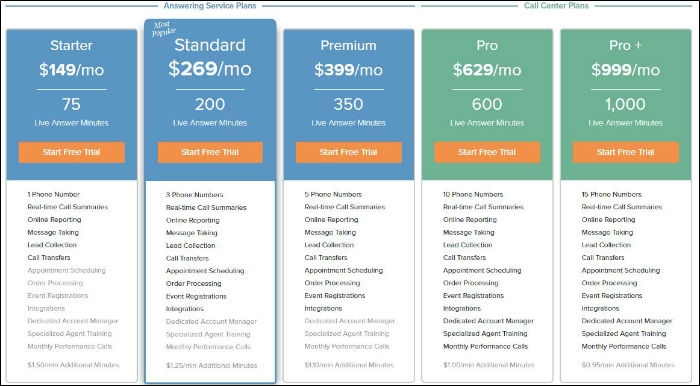 The plan you choose is going to be largely decided by the number of minutes you anticipate needing each month. However, if you need more than one phone number you will have to opt for a larger plan.

You only pay for the time that an agent is connected to someone on the end of the line. If you go over your minutes, you’ll be charged for each minute at a rate similar to the rate of your plan.

PATLive offers a 14-day free trial for all their plans, so it makes sense to take advantage of this. If for any reason you’re not happy with the service just cancel before the 14 days end, otherwise you’ll be transferred to the paid account of your choice.

There are a few highly rated US-based virtual receptionist companies worth considering if you’re looking for some other options to compare services and pricing with.

Ruby Receptionists and Gabbyville both operate on a similar business model and offer free trials. PATLive’s rates are more competitive, so if budget is your driving force, I recommend giving their free trial a go.

Have you worked with PATLive? If so, please leave a review of your experience below to help others with their decision.